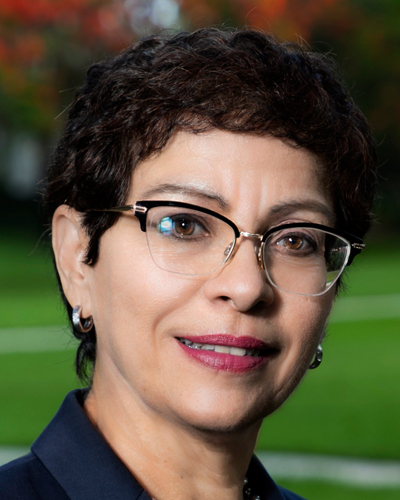 Dr. Magda Vergara is the Director of the Osher Lifelong Learning Institute (OLLI) at the University of Miami. Dr. Vergara has over 20 years of experience in higher education and private industry. Her professional highlights include serving on the faculty of Johnson and Wales University, working as an International Marketing Director and Consultant for a Brazilian corporation, and guiding internationally recognized non-profit Miami Book Fair as executive director. As faculty, she has taught Spanish language and literature, advanced English composition, Consumer Behavior, and Principles of marketing. Her corporate experience includes serving as Director of Marketing for a Brazilian firm and Executive Director of the Miami Book Fair. Her passion for learning, education, and people informs everything that she does.

Dr. Vergara is a co-founder of 1stGenYale and has served as an executive officer of the Association of Yale Alumni (AYA), chaired the Shared Interest Group of the AYA, which guides over 200 volunteer alumni organizations, and served as an Alumni Student Committee Director (recruiting alumni to interview over 250 applicants). Dr. Vergara has long-term involvement with Yale’s Day of Service; first serving as a local coordinator and then assuming more responsibility as a regional director, culminating in her role as Chair of Yale’s Global Day of Service Committee. As Chair, Dr. Vergara led the team that involved over 4000 volunteers at 251 sites in 43 states and 20 countries. She also successfully invited, and coordinated, Justice Sonia Sotomayor to serve as honorary chair. She coordinated production of the promotional video associated with the Day of Service.

Dr. Vergara received her undergraduate degree from Yale University in Administrative Sciences. She earned her MA from New York University in Hispanic Civilization and her PhD. in Spanish from the University of Virginia.