Building a Private Share Exchange for a $2-trillion Market 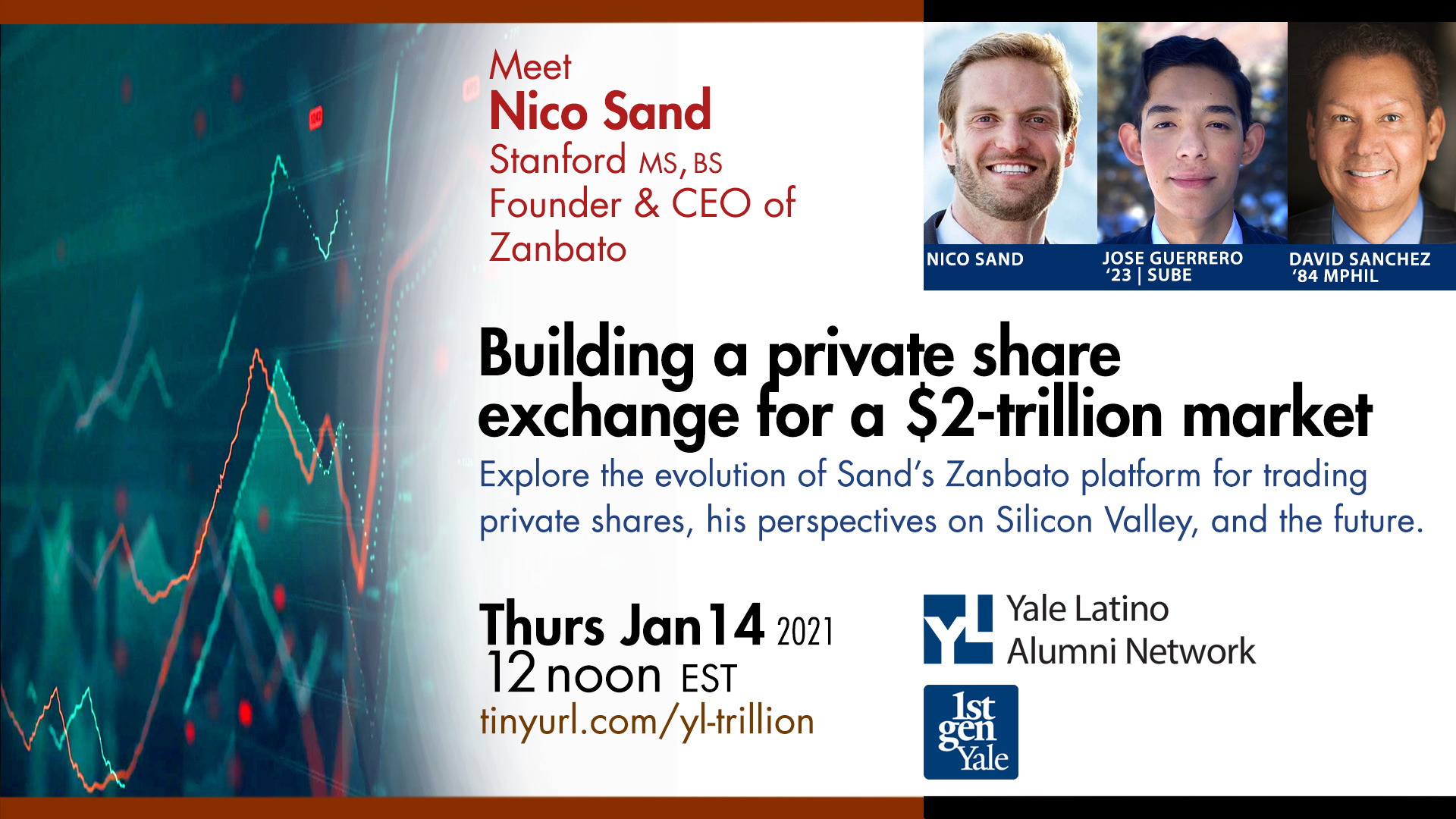 It’s a “billion dollar” question: as a student or alum preparing for a career, what attributes are needed to succeed in financial technology?

Nico Sand appears to have had those qualities. His vision led to Zanbato, a financial technology company established to make private markets more liquid and reliable. Launched in 2016, Zanbato’s ZX platform is an independent, SEC-registered, Alternative Trading System that is now the leading inter-broker platform for trading venture-backed private shares. More than 100 banks and brokers are involved with ZX with total ticket values of US$38 billion.

Our webinar will explore the evolution of his Zanbato vision , his perspectives on Silicon Valley, and the future. Nico will discuss his experience in Silicon Valley and the attributes he feels are most productive for students and younger Yale alumni including Latinx students. Jose Guerrero Razo ’23, a student active with SUBE, the Yale Latinx Business and Leadership Student Association, will be on the panel exploring this discussion with Nico.

Our speaker Nico Sand is a serial entrepreneur with experience founding and growing several businesses in his native Norway and the United States.

This webinar is brought to the Latinx and alumni community by the Yale Latino Alumni Network, in partnership with the YAA Shared Interest Groups and co-sponsored by 1stGenYale.

Nico Sand  holds both a Master of Science and Bachelor of Science in Management Science & Engineering from Stanford University, where he graduated Tau Beta Pi with distinction.

David Sanchez, Moderator of this webinar and Chair of the Yale Latino Alumni Network, earned two graduate degrees at Yale and has been a pioneer in hedge funds since 1989 as CEO of his firm, Singular Global LLC. David is president of the Yale Club of South Florida, has served twice on the YAA Board of Governors and was recently elected to the Yale Graduate School Alumni Association Board.  He was the inaugural Chair for the Yale Day of Service as a co-founder.

José Guerrero Razo is a sophomore in Ezra Stiles, majoring in Ethics, Politics and Economics.  He was born in Guadalajara, Mexico but currently lives in Columbus, Georgia. José has been a part of Sube since his first semester at Yale, and is now the Co-Chief of Professional Development. Beyond his involvement with Sube, José is part of the Yale Urban Philanthropic Fund, Yale Scholars of Finance, and the Yale Politic. Last summer, José interned at Clairvest Group, a mid-market private equity firm based in Toronto. This upcoming summer, José will be a deal team intern with Advent international.