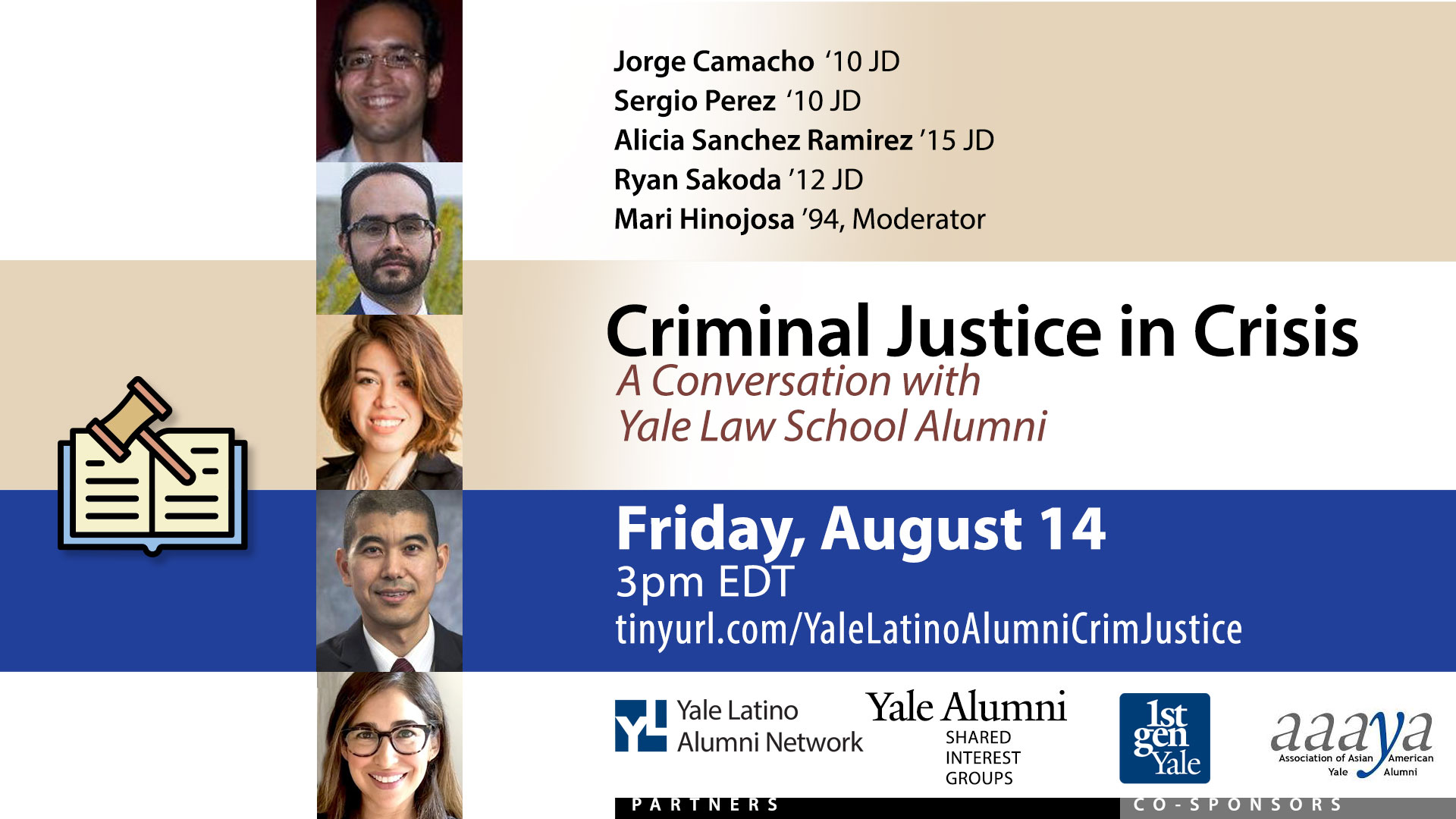 This webinar is brought to the alumni community by the Yale Latino Alumni Network in partnership with the Yale Alumni Association Shared Interest Groups, and is co-sponsored by 1stGenYale and the Association of Asian American Yale Alumni.

Jorge Camacho ‘10 JD is the incoming Policing, Law, and Policy Director at the Justice Collaboratory at Yale Law School, where he will be leading efforts to translate the Collaboratory’s research on policing into actionable policy at the local, state, and federal level. He is currently a Senior Counsel at the New York City Mayor’s Office of Criminal Justice and was previously a Senior Counsel at the Legal Counsel Division of the City’s Law Department and an Assistant District Attorney at the Manhattan DA’s Office. He is a current member of the Yale Law School Executive Committee and a former At-Large Delegate of the Yale Alumni Association. He was born and raised in New York City where he currently resides with his wife and two sons.

Sergio Perez ‘10 JD is the Executive Director of Orange County’s Office of Independent Review (OIR), which has oversight authority over justice-related county agencies, including the Orange County Sheriff’s Department and the Office of the District Attorney. Sergio has worked within the fields of civil rights and accountability for over a decade. Upon graduating from law school, he joined the U.S. Department of Justice’s Civil Rights Division as a trial attorney, addressing allegations of unconstitutional policing practices across the United States and its territories. He has also worked as Enforcement Counsel for the Consumer Financial Protection Bureau, as the Director of Enforcement for the Los Angeles City Ethics Commission, as a Deputy Attorney General at the California Department of Justice, and with the Los Angeles County Office of the Inspector General. While in law school, Sergio served as the Co-President of the Yale Law Latino/a Association.

Alicia Sanchez Ramirez ‘15 JD has represented hundreds of clients in Bronx Criminal and Supreme courts, from arraignments through dismissal, plea, or trial as a staff attorney with the Criminal Defense Practice. While at Yale Law School, she was a member of the Criminal Justice Clinic, where she represented clients in various criminal proceedings, and the Allard K. Lowenstein International Human Rights Clinic, where she investigated prison conditions in Connecticut’s death row. Alicia interned at the Mexican American Legal Defense and Educational Fund (MALDEF) and at The Bronx Defenders. She holds a B.A. in English and Creative Writing from the University of Chicago and is a native Spanish speaker.

Ryan Sakoda ‘12 JD is a Lecturer in Law and Bigelow Teaching Fellow at the University of Chicago Law School. His research focuses on the empirical analysis of crime and criminal justice policy. Most recently, he has written on the use of solitary confinement and the effects of probation and post-release supervision. Ryan previously worked as a staff attorney and served as a Liman Public Interest Fellow at the Boston public defender’s office where he represented indigent criminal defendants. At Yale Law School, he was a student attorney in the Prison Legal Services/Complex Federal Litigation clinic where he developed his interest in the criminal justice system. Ryan was also a member of the Asian Pacific American Law Students Association (APALSA, formerly known as PANA) and an editor on the Yale Law Journal. Ryan also holds a PhD in economics from Harvard and an MSc from the London School of Economics, and a Bachelor’s degree from the University of California, Berkeley.

MODERATOR | Mari Hinojosa ‘94 serves as a board member for Lawyers For Children, a nonprofit providing legal and social work advocacy for children in foster care in New York City, and chairs the social action committee at Central Synagogue, focusing on criminal justice reform. She has worked on campaigns to pass New York State legislation such as Raise the Age (raising the age of criminal responsibility), bail reform, and Turn on the Tap (providing educational opportunities to incarcerated students). Mari is a native of San Antonio, Texas, and also holds a JD from Harvard Law School. After law school, she received a Skadden Fellowship to work at Lawyers For Children, where she remained for seventeen years, first as an attorney and ultimately as the director of development. Mari serves as a Yale Alumni Association (YAA) delegate from the Class of 1994, a member of the YAA Board of Governors Nominating Committee, and on the Yale Latino Alumni Network’s NYC leadership team.

This webinar is brought to the alumni community by the Yale Latino Alumni Network in partnership with the Yale Alumni Association Shared Interest Groups, and is co-sponsored by 1stGenYale and the Association of Asian American Yale Alumni.